Having observed that fresh cold brew tastes incredible and that the flavours seemed to erode over a few days, I set out to test the effects of oxidisation on cold brew.

Typically, we brew a batch of cold brew in a Toddy coffee system (pictured below) about once a week, with my partner and I guzzling the concentrated contents diluted with hot or cold water for quick coffees during the workday. 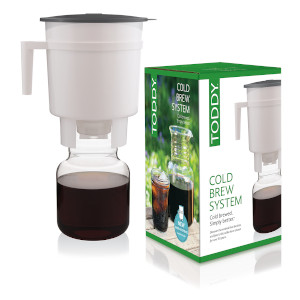 When I took my last batch off on Monday, I left most of the cold brew in the toddy carafe as usual (rubber sealing lid, but lots of headspace, lots of O2 ingress every time it’s opened) but also filled up a 450ml fliptop bottle (pictured below) very full, leaving only a few mL headspace.

On Thursday morning, I made two identical glasses of cold brew measured with a liquid syringe at 3 parts cold brew to 2 parts water. The flavour difference was significant with the lighter, fruity flavours being immediately obvious in the sealed sample as well as what I believed to be a difference in the mouthfeel.

Ideally, I would have done triangle tests to reduce bias, but I am wise enough not to ask my partner to facilitate/participate in a sensory analysis test at 7am when she’s getting ready for work.

The only real takeaway for me is that if you’re brewing a big batch of cold brew and you’re wanting to retain flavour, it might be worth sealing the batch in smaller quantities which is neither novel or surprising.

It’d be good to repeat this with actual triangle tests with multiple participants and let the samples age further.